The amount of offset used for the move is determined by the distance the cursor is clicked and dragged in the canvas view.

When the shift key is held down during tool interaction movement will be constrained to horizontal and vertical movement.

The 'Arrow' keys can also be pressed to 'Nudge' the Move Tool action a single pixel in the corresponding direction.

If this checkbox is toggled active then a dashed box will encircle the boundary of the currently selected Canvas Layer(s) or active selection. 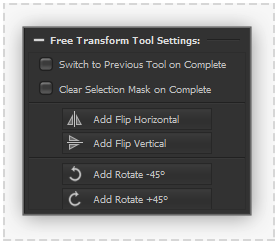 Interactively Move, Rotate and Scale the currently selected Canvas Layer(s), alternatively if a selection is active then this area of the currently Layer will be transformed.

A box bounding of the current selection area or selected Canvas Layer(s) with handles at the corners and edge centres will be displayed in the Canvas View.

To perform transforms the following methods can be used, a corresponding cursor icon representing the method in the areas where available:

During the interaction of the tool any transforms will be previewed using 'Bilinear interpolation'. When a transform operation is completed high quality 'Bicubic interpolation' is used.

To complete a transform operation the following methods can be used: