This page was made for PanelForge v1. Some details may be incomplete or have changed when referring to PanelForge v2.

The 'Canvas Layers' palette provides the functionality to organise and adjust the image layers which are composited together to form the current Panel's Canvas.

More information about the 'Layer' element of a Panel's Canvas can be found in the Canvas documentation. 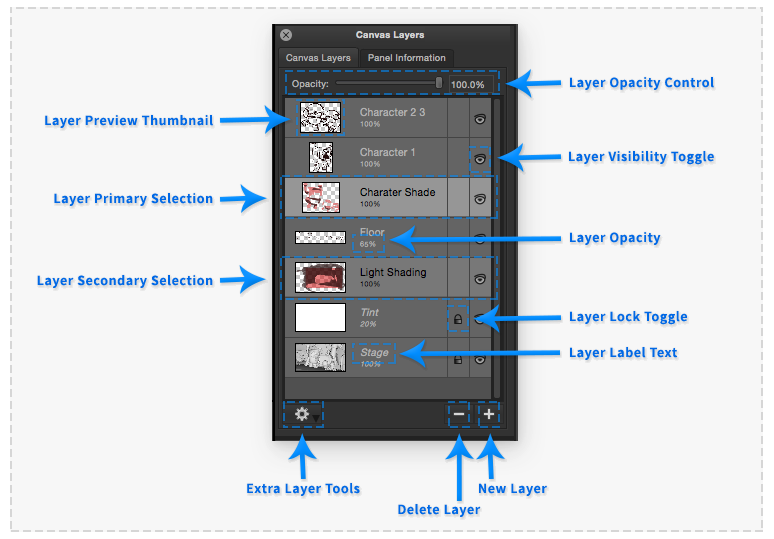 The main central area of the palette is the list of the layers contained in the current panel's canvas. These layers are ordered with the uppermost layer first down to the lower most layer last.

Double clicking the Layer Label Text will allow the corresponding layer to be renamed using the displayed text edit field.

The Layer Primary Selection highlighted in light grey will be editable with the Canvas Tools. This primary selected Layer can be selected by clicking the mouse cursor on the corresponding Layer in this list.

Multiple Layer Secondary Selections highlighted in medium grey can also be selected in this list. Selection is performed using the shift and control key modifiers and clicking the mouse cursor on a Layer in the list.

Layers can be reordered in the list resulting in the Canvas layers being composited in a different order. Selected layers can reordered by being dragged with the mouse cursor to a different location in the list.

In addition layers can be dragged to other Panels displayed in the Panel Timeline and Panel Thumbnails palettes to copy the layer to the other Panel Canvas.

It is also possible to drag and drop layers to the Assets palette, the layer will be added to the corresponding place in the asset library where dropped as a PNG image file with alpha transparency.

All Panels have a special layer named 'Stage', this layer shows the contents of the 3D Stage through the 'Panel Camera' at the last edited state.

The 'Stage' layer cannot be deleted and is always locked from being edited with Canvas Workspace. Although this layer can be reordered, hidden, duplicated and have its opacity adjusted.

The following describes additional user interface controls above and below the 'Layer List':

Slider and value input to adjust the primary selected layer's opacity. The opacity will be updated in real-time. The opacity of each Layer is also displayed as a percentage in the 'Layer List'.

Clicking the More Menu button will display a popup menu with the following items: